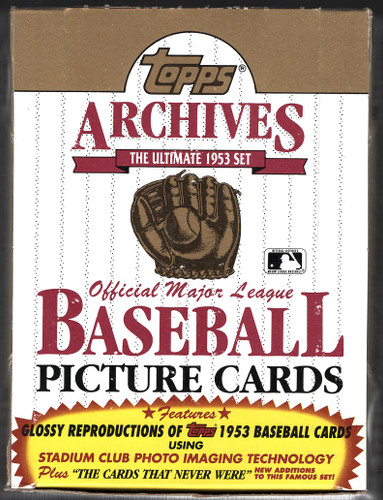 HOBBY ONLY PRODUCT WITH ONLY 18,000 TOTAL CASES PRODUCED!

1991 Topps Archives is a 337-card reprint of the original 1953 Topps set. Dubbed "The Ultimate 1953 Set," all 274 original cards with the exception of Billy Loes #174 are included in the set and are printed using "Stadium Club" printing technology. The final 57 cards feature "cards that never were," including 1953 HOF inductees Dizzy Dean and Al Simmons, "prospect" Hank Aaron, and the "rookie card" of Eleanor Engle, a 24-year old woman who signed a contract with and attempted to play for the minor league Harrisburg Senators in 1952.

Each card measures the standard 2 1/2" X 3 1/2", slightly smaller and narrower than the originals.