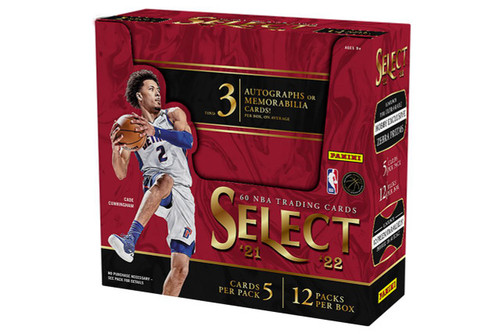 Continuing the celebration of the 75th season of the NBA, Select basketball returns with its opti-chrome technology and a variety of parallels, autographs, memorabilia, and insert cards to chase for every type of collector!

Collect all three tiers of the base set, which include Base Concourse, Base Premier Level, and Base Courtside.

Find 3 Autographs or Memorabilia Cards in each Hobby Box! Search for autographs of Cade Cunningham, Jalen Green, Evan Mobley, and many more from a deep rookie class!

Search for Hobby inserts such as Unstoppable, En Fuego, Select Future, and Phenomenon!

BASE: Collect each tier of base cards in Base Concourse, Base Premier Level, and Base Courtside. Find these in a variety of parallels including the short-printed Zebra parallel!

AUTOGRAPHS: Collect the top rookies from the 2021 NBA Draft in Rookie Jersey Autographs & Rookie Signatures! Also collect the popular In Flight Signatures set, with a variety of parallels including the 1-of-1 Black Prizm!

INSERTS: Inserts such as Unstoppable, En Fuego, Select Future, and Phenomenon can be found in parallels such as Silver Prizm, Gold Prizm (#'d/10), and Black Prizm one of one!